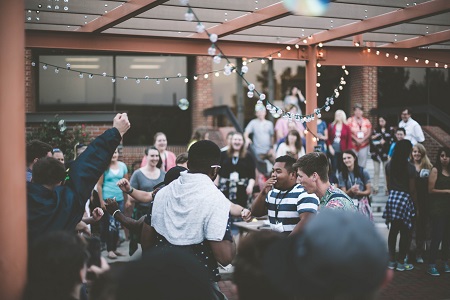 Years ago when I could actually stay awake past midnight, my friend and I would make plans to go out every New Year’s Eve. Everyone else had plans, so we figured we should too. We’d go and it would be alright, but one year we decided to stay home, watch movies, and eat junk food, and you know what? We loved it and it became our go-to New Year’s Eve plan after that.

A classic case of FOMO – Fear of Missing Out. We think something must be great if others are doing it, so we decide we have to do it too to avoid missing out on that greatness. And even if it’s not so great for us, at least we’re part of the crowd, and that’s good enough, right? Well, it’s actually not.

When we choose something because of FOMO, we’re making that choice to avoid feeling that maybe we’ve missed out on something or that others are cooler or more in the know than we are. It may have nothing to do with whatever it is we’re choosing and if it’s actually something meaningful for us. Whether it’s what we do for self-care, how we spend our money, or the plans we make for New Year’s Eve, FOMO may mean putting aside our own needs and what we know matters to us in favour of others’ preferences that in the end might not actually matter to us personally.

Of course, there is nothing wrong with trying something new, and it’s great to push ourselves out of our comfort zones from time to time. So how do we tell the difference between these kinds of situations and FOMO? Ask yourself why you’re making a choice. If the only answer is “because everyone else is doing it”, that could be FOMO at work. If it’s something like “I think I’ll enjoy it” or “I’ve heard about it and want to see what it’s like”, that’s different – there’s an element of personal interest.

Also, pay attention to your thoughts. If they’re something like, “I hate these shoes, I’m mad I spent money on them, and I don’t want to wear them…but everyone else has them, so I guess I’ll just suck it up”, that resentment and being down on yourself won’t feel very good. And if it’s something more significant than shoes – say the people we spend time with or what we do with our down time – these kinds of feelings can take a real toll on our wellness.

Photo by Samantha Gades on Unsplash

Previous Post: « All parties falling short on promises to solve the opioid crisis