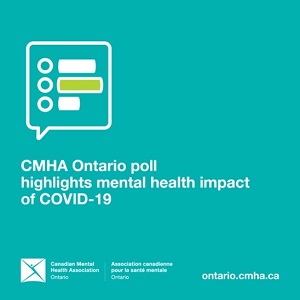 (Toronto, May 11, 2020) – Seven out of 10 Ontarians (69 per cent) believe the province is headed for a “serious mental health crisis” as it emerges from this pandemic and nearly eight out of 10 (77 per cent) say more mental health supports will be necessary to help society, according to new poll results released today.

CMHA Ontario is looking to evaluate how Ontarians’ perceptions of their mental health are changing as they come out from underneath the pandemic. Two more surveys will follow in the coming months as restrictions loosen around COVID-19 and the economy continues to re-open.

Nearly everyone (90 per cent) is concerned about COVID-19’s impact on the economy and 69 per cent of Ontarians are concerned about the impact the outbreak has on their personal finances.

One finding of note is that while 67 per cent of Ontarians are worrying about the mental health impact on family and friends, fewer Ontarians – 53 per cent – are concerned about their own mental health.

“Stigma is likely playing a role in this self-reporting in that it’s much easier for Ontarians to admit concern for their physical health or for others than their own mental health,” said Camille Quenneville, CEO of CMHA Ontario.

“We look forward to the next phases of this research to gain a broader understanding of how the pandemic has affected our province and how we can best move forward to support Ontarians as they address mental health and addictions issues,” Quenneville said.

Canadian Mental Health Association (CMHA), Ontario is a not-for-profit, charitable organization. We work to improve the lives of all Ontarians through leadership, collaboration and continual pursuit of excellence in community-based mental health and addictions services. Our vision is a society that embraces and invests in the mental health of all people. We are a trusted advisor to government, contributing to health systems development through policy formulation and recommendations that promote positive mental health. Our 28 local CMHA branches, together with community-based mental health and addictions service providers across the province, serve approximately 500,000 Ontarians each year.