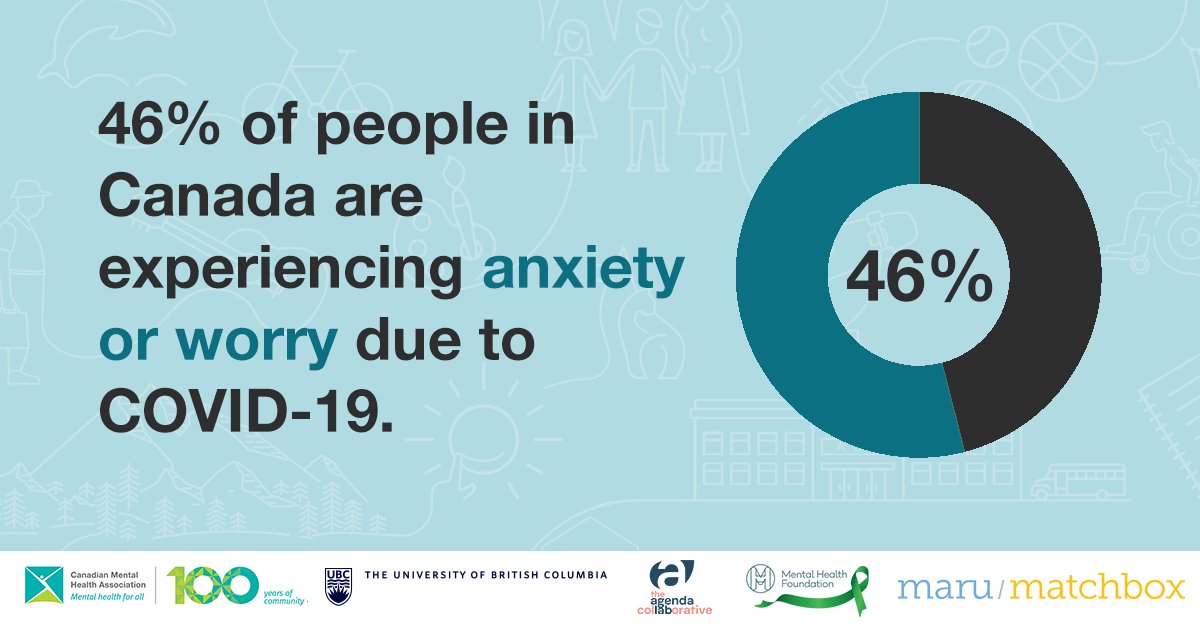 Toronto, ON and Vancouver, BC (June 25, 2020) – The pandemic has caused intense stress and disruption for all people in Canada, and is causing pronounced mental health concerns, including suicidal thoughts and feelings, in various subgroups of the population, including parents, those with existing mental illness or mental health issues, Indigenous people and those with a disability or who identify as LGBTQ+. This is according to a new nationwide survey on the mental health impacts of COVID-19, released today by the Canadian Mental Health Association (CMHA) in partnership with UBC researchers.

Those more vulnerable to suicide

Existing research shows the COVID-19 pandemic and accompanying economic devastation are expected to have large-scale L’ effects on overall mental health, including an increase in suicide.[1] In 2019, 2.5% of Canadians reported having had suicidal thoughts within the previous year. In comparison, in the thick of the pandemic in May, this survey found that 1 in 20 Canadians (6%) had recently experienced thoughts or feelings of suicide as a result of the pandemic, with a more glaring warning sign pointing to certain groups.

This study found that suicidal thoughts/feelings during the pandemic were more common for the following people:

“The pandemic is widening persistent mental health inequities and making things worse for those who were already vulnerable due to experiences of marginalization,” says lead researcher Emily Jenkins, a professor of nursing at UBC who studies mental health and substance use. “When we strain all the parts of daily living—healthcare, childcare, schooling, job security—we see the direct, negative effects on people’s mental health.”

Those with existing mental health issues

Despite the high prevalence of mental illness, including substance use and addiction disorders, in Canada, 1.6 million Canadians already reported they had unmet mental health care needs even before the pandemic hit.[2]

Those who were already struggling with their mental health are:

“People with pre-existing mental health conditions are some of the hardest hit,” says Margaret Eaton, national CEO, CMHA. “The pandemic is exposing how broken our mental health system already was in Canada. We must invest in community mental health programs and services, improve our nationwide suicide prevention plan and seize this opportunity to fix our system for the longer term.”

Those with children under 18

So much of the public health messaging is about how children are less likely to get sick from coronavirus disease—but they may be some of the most vulnerable to the mental health effects, with 24% of parents describing a deterioration in their children’s mental health.

Parents living with children under 18 are also suffering more than those without young kids:

Being confined to close quarters at home under physical distancing measures, with concerns about money (45%), job loss (31%) and having enough food to feed their families (21%), parents report having more conflicts with their children (23%), yelling/shouting more (17%), disciplining their children more (17%) and using harsh words more often (11%).

“The pandemic is a perfect storm of stress for parents and their kids, with one in four reporting their children’s mental health has worsened during the pandemic,” says Anne Gadermann, co-lead researcher and professor at the School of Population and Public Health, UBC. “I’m particularly worried about those families who are experiencing multiple vulnerabilities, such as people facing discrimination or systemic racism, those with low incomes or a disability.”

Amidst the stress, there are encouraging signs of resilience. Parents report having increased quality time (66%) and observing increased resilience (strength and perseverance) in their children (38%). And many people in Canada are finding ways to protect their own mental health, with exercise being the preferred strategy at 59 per cent, followed by connecting with family and friends (56%) and maintaining a healthy lifestyle (43%).

“While these are important strategies for individuals who have the ability and means to support their own mental health, the pandemic has highlighted that mental health is not simply an individual responsibility,” says Eaton. “Without policy-level interventions to improve social conditions and safeguard mental health for the entire population, many solutions will remain unsuccessful and hard to access.”

The survey was conducted by Maru/Matchbox among a representative sample of 3,000 people living in Canada ages 18 and up, and ran from May 14-29, as many provinces and territories were starting to reopen after lockdown and other measures.

It is the first of three strategic waves of national surveying that is also aligned with work being conducted by the Mental Health Foundation in the U.K.