Home » Blog » Uncategorized » We Meant to Write this Sooner… 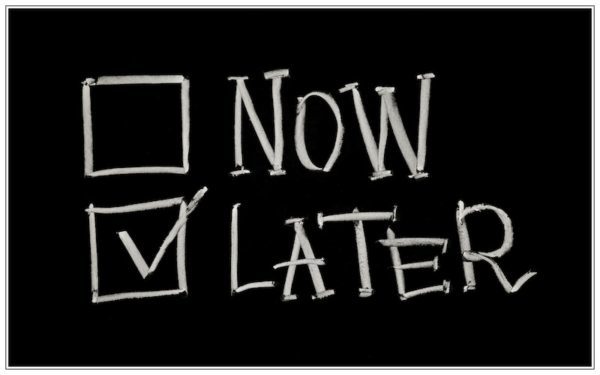 For example, we have an assignment due in a week for a class we’re taking. While we know that starting it now will give us more time to complete it, we put it off. Watching a movie instead will be fun right now – an instant reward – while we won’t have the satisfaction of completing the assignment for a week – a delayed reward. So, we pick the instant reward over the delayed reward and watch a movie, maybe for a series of days.

By this point, we’re getting more anxious about the assignment with only a few days left to go until the due date. So, the reward of getting it done becomes more immediate – a few days in the future is closer than a week – and we may finally tackle the job.

Other than choosing an instant reward over a delayed one, what else can lead to procrastination?

Often, the procrastination or dread of a task is actually worse than doing the task itself. Think about how we feel and what we may say to ourselves while procrastinating: “I shouldn’t be doing this,” “Why am I so lazy?”, “How am I going to get this done on time?” All that takes a toll on our stress and anxiety levels.

So, what can we do to address procrastination? Here are a few tips:

Now to get to that housecleaning…