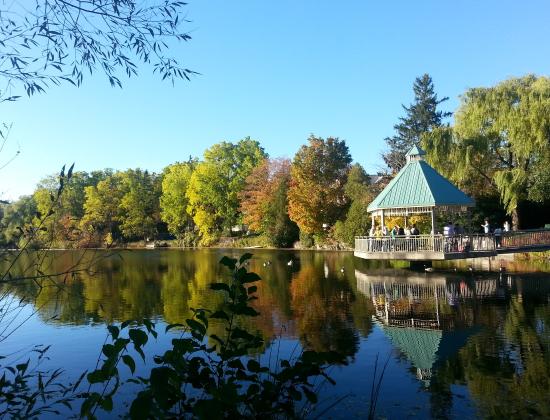 My name is Stew Phillips and this is the story of how the Canadian Mental Health Association saved my life with just one phone call. Without that call, my story of recovery, which you are about to read, would never have happened.

In 2004, I never believed things could always get better. Here’s why. After 30 years as an advertising copywriter, mainly for radio, I was told in 2004 at the age of 49 that I could not work anymore due to health problems resulting from an aggressive form of Crohn’s Disease. Within 30 days of receiving that news, my mother passed away and three months later I moved to Milton. Death, unemployment, poor health, and moving were the four triggers my mind needed to completely shut down. I could not process any information and I cried all the time.

Still, it all boils down to choice. In 2004, as I sat by the Millpond in Milton crying, realizing that I had hit the final straw with my rooming house being shut down, I had to make the choice.

Should I follow the urge to just walk away from everyone and everything?

I realize now how easy it is, emotionally, to end up living on the street. My brain and my body were numb.

Instead, I called the Canadian Mental Health Association. Luckily their profile in all communities was really high, so they were the first organization I thought of. When I told them I was suicidal, they suggested I go to the North Halton Mental Health Clinic since it was just one block away in Milton. The nice receptionist who took the call said she would call the Clinic in a few minutes to make sure I got there.

When you’re suffering from depression you always believe you’re a victim, that things will never work out. I already made a promise to myself: if the Clinic didn’t give me the reception I needed, I would walk away, never to be seen again. Luckily, they welcomed me with hugs and rapid crisis intervention.

How different my life would have been if I had decided to not “try one more time”.

The Clinic alerted me to a pre-existing chemical imbalance of serotonin in my brain which was genetic in origin. It was causing my depression, which also probably contributed to my anxiety. Between 2004 and 2007, with one-to-one therapy, I accepted my disabilities and a future that would be totally different than the previous 30 years had been.

By 2007, I had been renting a room partitioned off in a basement family room for 3 years. My body and my mind were in crisis. In 2007, while in hospital with a Crohn’s Disease attack, I was lucky not to have to return to that basement room and instead received an interview for a subsidized apartment. When I entered the interview, there were 12 people, mainly from Support and Housing Halton, sitting around a table. At the end of the interview, I called them my “peeps” – 12 people whose main purpose was to help take care of me with the support and housing I needed.

I took a breath and finally felt my road to recovery wasn’t a dusty path but a clear road to change.

When I saw my apartment for the first time in 2007, I looked out from my balcony and saw the parking lot behind my old rooming house. Three years earlier, I had stood in that parking lot, wishing I could live in “that nice apartment” just yards away from where I was standing. The building I was about to move into was the very same one I had wished to live in. I always wondered what would have happened if I had wished for a million dollars.

While sitting on a park bench in 2007 – ironically the same park bench where I sat crying in 2004 – my Support and Housing Halton community support worker told me about and organization called TEACH – Teach Empower Advocate for Community Health. TEACH provides group therapy seminars on anxiety, self-esteem, and circle of care recovery. From the moment I interacted with others in TEACH’s group seminar on anxiety disorders, my obsessive behavior peeled away like an onion.

The knot paralyzing my brain began to unravel as my depression and anxiety symptoms loosened their grip on me.

Through subsequent group therapy and interactive seminars on self-esteem and recovery, I received valuable information which helped me to continue my journey forward. I learned you don’t have to be symptom-free in order to be in recovery. You just have to be able to cope and function with the symptoms you do have.

In 2008, I came full circle, doing what I thought I would never be capable of. I became a facilitator for TEACH’s self-esteem, recovery and anxiety seminars, the same seminars that had helped me just one year earlier. Not to sound like a teenager, but TEACH was where I totally wanted to be! It was SO awesome! I experienced amazing feelings you can only obtain from people talking to people. If one-to-one therapy took me part of the way, the people-to-people approach took me the rest of the way, showing me there was a reason for me to keep going.

Thanks to my community support worker, I learned about a program called T.A.M.I. – Talking About Mental Illness. I volunteered with them for six years and talked to high school students about my illness and recovery. I have been told I was responsible for helping a number of students reach out, some coming forward with their thoughts of suicide.

Today, I continue with TEACH as a peer mentor. Giving back to my community is important so others can get the same help I did. I get as much out of volunteering as the people I am reaching out to.

I’ve crossed the bridge between just surviving and thriving.

What would have happened back in 2004 if I hadn’t called the Canadian Mental Health Association? Things would have been a lot different, not only for me, but for the many people I have helped over the past13 years.

Back when my story of recovery started, I never believed people when they said, “Things can get better – good times are just around the corner.” Thanks to that phone call to CMHA 13 years ago, I was given a chance to learn things can get better if you just keep going.

Previous Post: « Part 2 – Ten Tips for Mental Health
Next Post: There isn’t an R in “Wellness”…or is there? »