Home » Blog » What's New » Overgeneralizing: How “always” and “never” can… 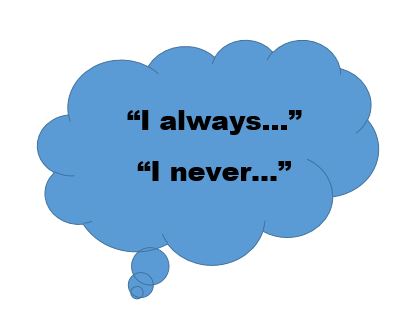 “Oh no! I forgot to call that person back! I always forget everything. I’m never going to remember to call anyone.”

Does this sound like you or someone you know? It’s a great example of overgeneralizing, a thinking distortion that involves drawing broad conclusions based on limited occurrences or experiences. It often takes the form of either concluding that something that just happened is part of an inevitable pattern or prematurely deciding the outcomes of future events and experiences.

Let’s use trying a new recipe as an example. You find one that sounds delicious, but it doesn’t turn out so great. What do you think and say about it? If you overgeneralize, it could sound like, “I never cook anything well. I always mess up the cooking time, and I’ll never try another new recipe again.”

Some good hints that there is some overgeneralizing happening are the words “never” and “always”. Even though this might not be your best dish, it’s not very likely that you’ve never made anything good or that you’ve overcooked everything you’ve ever made. It’s totally OK to feel disappointed that the recipe didn’t turn out, but be on the lookout for overgeneralizing. Feeling a bit down or down on ourselves makes it more likely that we’ll remember past experiences through that same lens. That is, we’re more likely to remember the cooking disasters rather than the successes because they are more consistent with our present feelings.

Another indicator of overgeneralizing is predicting the future based on what just happened. In the recipe example, it’s deciding that all future attempts at new recipes will unsuccessful. Again. If we’re feeling discouraged in the moment, it’s very tempting for our thoughts to go in that direction.

So how can we think more reasonably if we tend to overgeneralize? The first step is catching the thoughts, which takes some close attention – we may not be aware of the thoughts if they’ve become habits. Listen for the “always”, “never”, and future predictions going through your mind. Then, consciously question those thoughts. Ask yourself, “Do I really never cook anything well? Haven’t I made good things in the past? Could it be that this recipe flopping will have no influence on other new recipes?” Work on telling yourself that this is a case of one recipe not working out…that’s it, that’s all.

And label what you’re feeling – such as “I’m feeling annoyed” – rather than extending your experience and painting everything with the same brush – such as “I’m a terrible cook.” Take what you can from the experience, such deciding that you’ll practice cooking a certain ingredient. Don’t let overgeneralizing take away a good chance to learn.